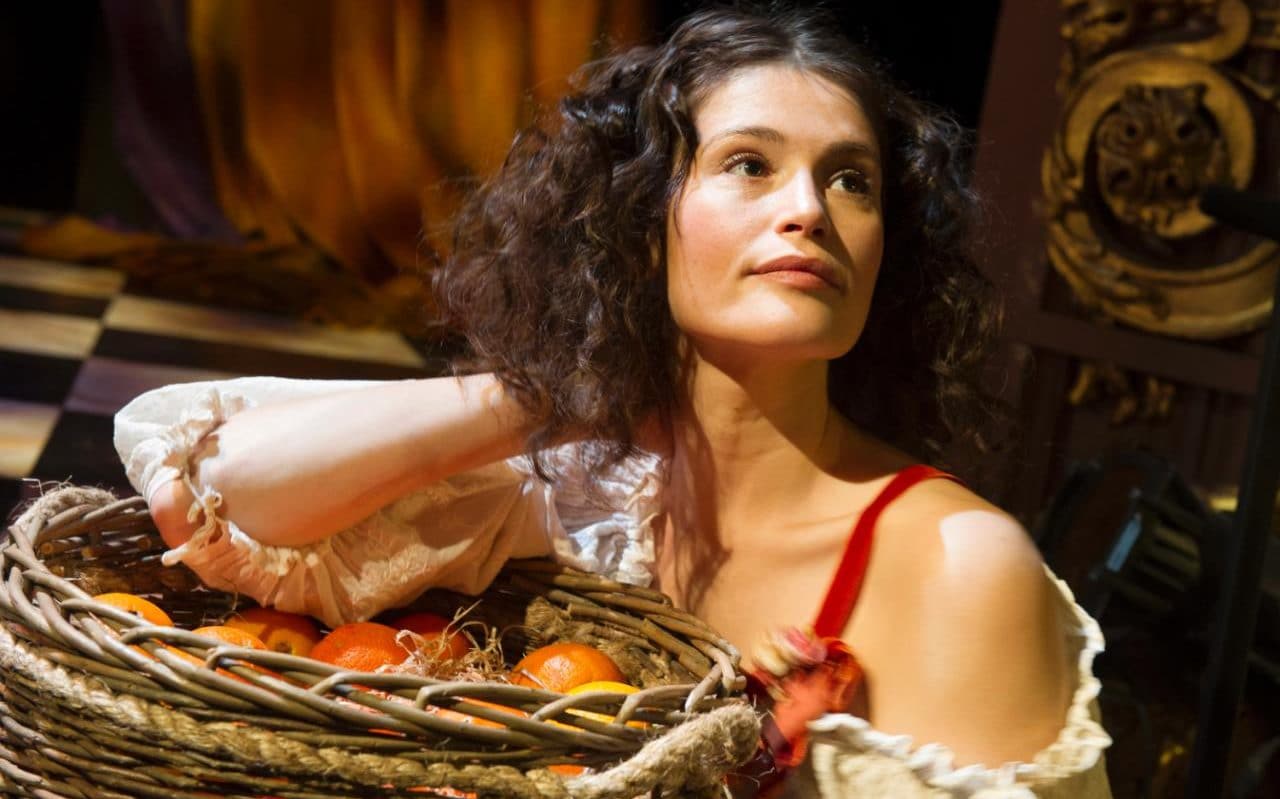 We take them for granted now, year round. But once upon a time, in England and Ireland, oranges were a hot new snack that it was cool to eat… and be seen eating.

Though oranges had been growing in Spain since around the 1300’s — brought there from North Africa by the Moors — the centuries-long hostility between England and Spain meant that no oranges had ever come north by direct trade. Their arrival in the British Isles was therefore delayed until the mid-1600’s, around the same time that Britain started establishing trading bases in the Caribbean, and seeds and slips from orange trees planted there by the Spanish came into the hands of English-based merchants when trading islands changed hands.

Soon thereafter oranges began turning up in the streets of London as the hot new gourmet snack, sold by entrepreneurs like the (later) actress Nell Gwyn (as played by Gemma Arterton in the image above) — who caught the eye of King Charles II while selling oranges at the playhouse that later became London’s Theatre Royal. As the orange supply increased, people started using oranges in other ways than just eating them out of hand. These were bitterer oranges than we’d now be used to, ancestors of the modern Seville orange: and as their novelty wore off a little, people started thinking of them more as a seasoning or spice than as a fruit as such. One favorite approach was using them to season hot wine drinks.

Jonathan Swift, the famous Irish poet, writer and foodie, used to amuse himself by writing advertising “cries” of the kind that freelance foodsellers used to advertise their wares in the street. As a cry for a lady selling oranges in the street, Swift wrote:

Come buy my fine oranges, sauce for your veal,
and charming, when squeezed in a pot of brown ale:
Well roasted, with sugar and wine in a cup,
They’ll make a sweet Bishop when gentlefolk sup.

— a Bishop being a standard name for a mixed drink like our modern mulled wine, scented with citrus and spices. In the original versions of the recipe, lemon was used instead: the whole unpeeled lemon was stuck with cloves and roasted by an open fire, then simmered along with the wine, sugar and spices.

Somewhere along the line the drink was turned into a dessert — possibly at Swift’s request. Check out our recipe for Deam Swift’s Burnt Oranges here.

ORIGINAL RECIPES © 1995-2023 REAL IRISH DESSERTS | A DIVISION OF EUROPEANCUISINES.COM | AND THE OWL SPRINGS PARTNERSHIP | ICONS VIA THE NOUN PROJECT AND FREEPIK AT FLATICON.COM WITH CC 3.0 LICENSE